Bhutan is rapidly changing with a great deal of construction going on, particularly in Thimphu and Paro. As a result, these places have already started to lose their charm and authenticity. Visitors are advised to fly internally from Paro to Bumthang, in the heart of Bhutan, in order to experience the traditional Bhutan. If you're thinking of visiting Bhutan, it's better to go sooner rather than later!

Why Bhutan is so expensive? Tour cost?

The Bhutanese government makes the tourism policy of minimum daily expense, to provide high value service and experience as possible instead of serving large number of tourists with low quality service.

For high season, the minimum daily package is USD 250 per person per day; or $200 for low season.

Higher daily packages are available, $290 and $280. The differences are more about accommodation.

The daily package will reduce $50 in low season.

Tour guiding, hotels, driver and transportation, meals, entrance fees and activities, support service for trekking are all included, beverage is not included.

What's not included are things like beverages (alcohol and sodas), personal expense, shopping and tips.

Must I take a tour to visit Bhutan?

You need to pay the minimum of $250 per day per person from the first arrival day, and you have to book a tour with a local travel company to obtain the visa. Therefore, it is not possible to take it as an independent travel in Bhutan.

The passport holders who are only from India, Balangdesh and Maldive can take indepedent travel.

You have choice to join a small group tour or take a custom designed tour.

A minimum of 2 people in a tour group, but less than 4 people need to pay a surcharge. Depending on the number of people in the group, the surcharge is divided into three levels: 20 USD, 30 USD and 40 USD.

Places to visit and things to do

The most precarious temple in the Kingdom of Bhutan-Tiger Cave Temple, it is said that when the Indian Guru Padmasambhava rode a tiger to build the temple, the entire monastery was built on a cliff with an altitude of 3,200 meters.

Visitors start climbing at an altitude of 2,400. 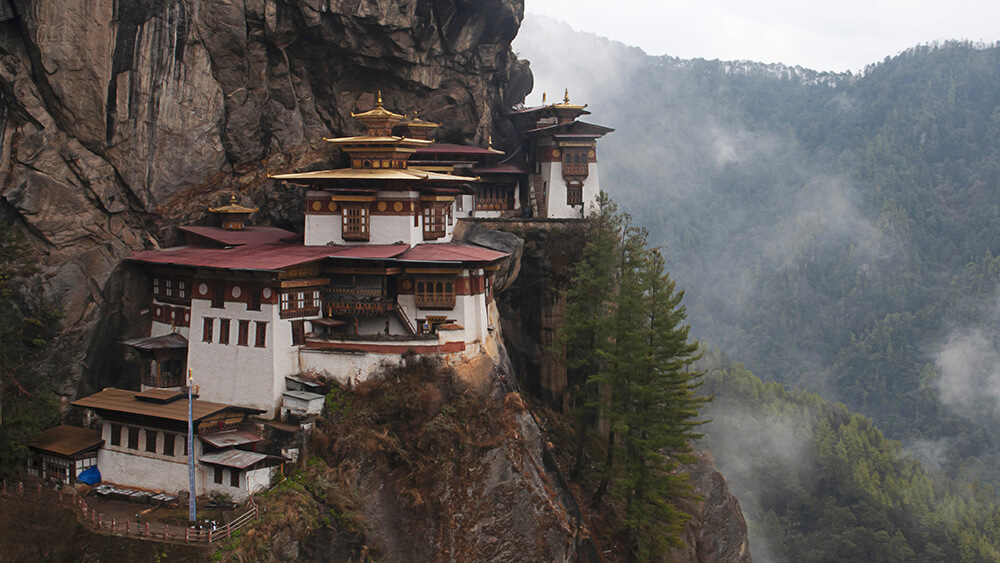 Rinpung Dzong , known as the Fortress on a Heap of Jewels, Rinpung Dzong or Rinchen Pung Dzong resides in the Paro Valley of Bhutan.

Constructed in 1644 for the purpose of defending the Paro valley from aggression by Tibet it is considered one of the most impressive structures of Bhutanese architecture.

What makes it stand out is the intricate wood work with much of the large beams being slotted into each other and held together without nails. 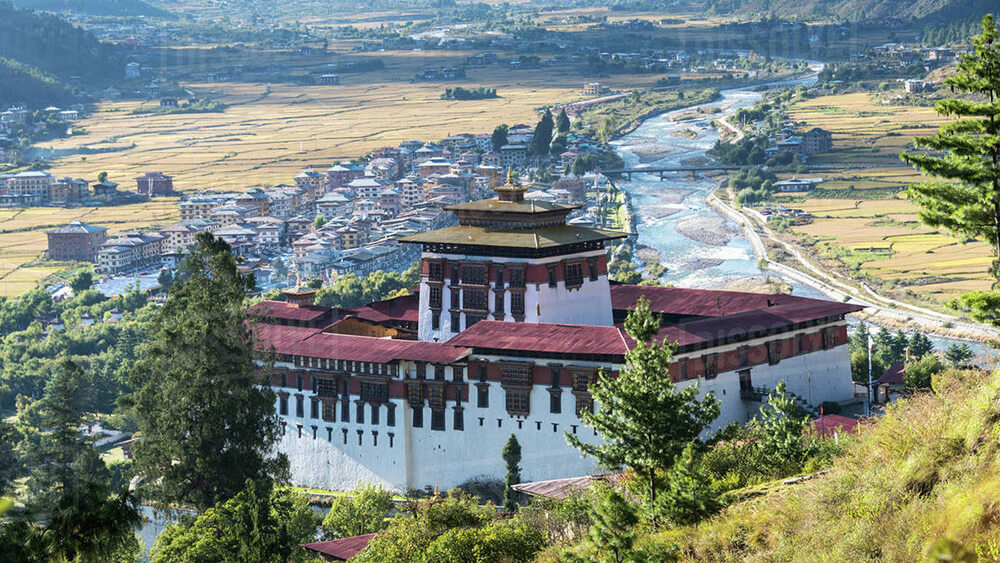 #3 Chele La Pass – Get Views Of The Himalayas

Located at an altitude of about 3,989 meters, Chele La pass is among the popular tourist places in Bhutan.

This pass is located at the 13,000 feet above in the west from the Paro valley, it is the highest road pass of Bhutan and is surrounded with amazing views of the Himalayan range, and the Mount Jomolhari, which is this country’s most sacred mountain and it’s over 22,000 feet. To reach this Bhutan tourist attraction you have to take one and a half hour drive from the valley floor of Paro. 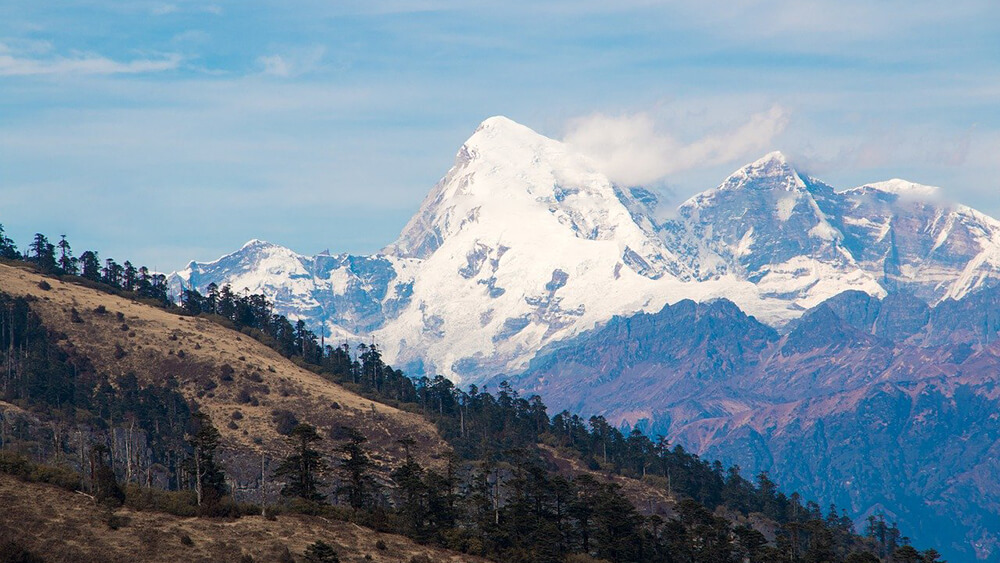 Straddling the meanders of the Raidak River in its own little crack in the middle of the western Bhutanese Himalaya, Timphu is a curios place.

With its ancient temples and monastery complexes it oozes with age-old Buddhist charm, while the recent arrival of motorized traffic and modern business gives it the energy and flair of a new capital.

Landmarks abound too, from the 15th-century Changangkha Lhakhang to the grand bronze effigy of Sakyamuni Buddha with its views over the mountains.

Also, don’t miss the colossal Trashi Chhoe Dzong, which is now the home of Bhutan’s government. 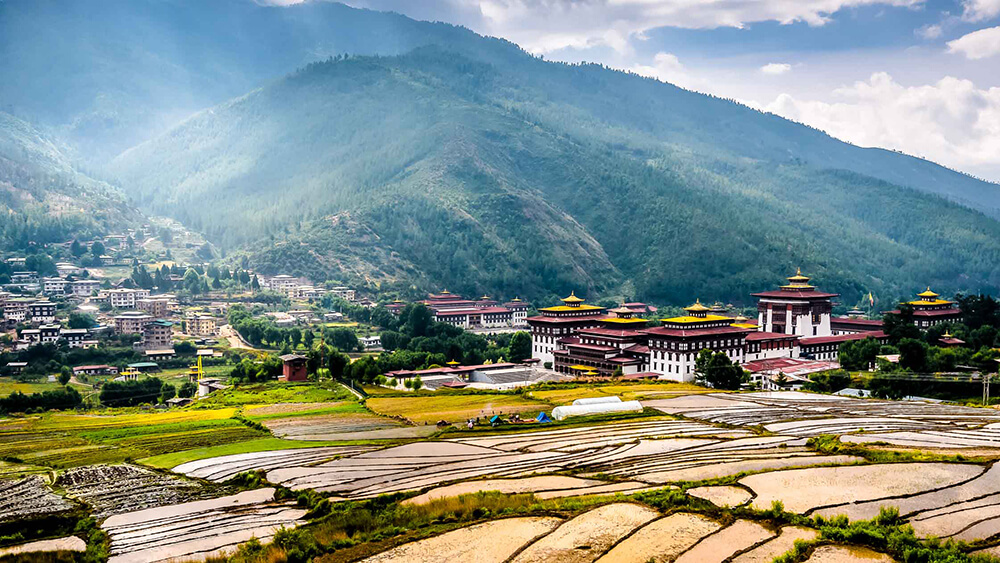 #5 Paro Valley – a picturesque place to visit in Bhutan

Paro is the first place you will see when you enter the country since it is where the only international airport is located.

A picturesque valley and home to the great Rinpung Dzong (traditional Bhutanese monastery) which serves as a monastery as well as a fortress.

The sheer size of the monastery overlooking the Paro river will leave you spellbound.

Faith is intrinsic to Bhutan and so, you will come across innumerable places of worship, whitewashed Dzongs, and locals spinning the prayer wheel.

Do visit the National Museum in Paro, not only are the views stunning from here, but the structure of the building is unique in itself. 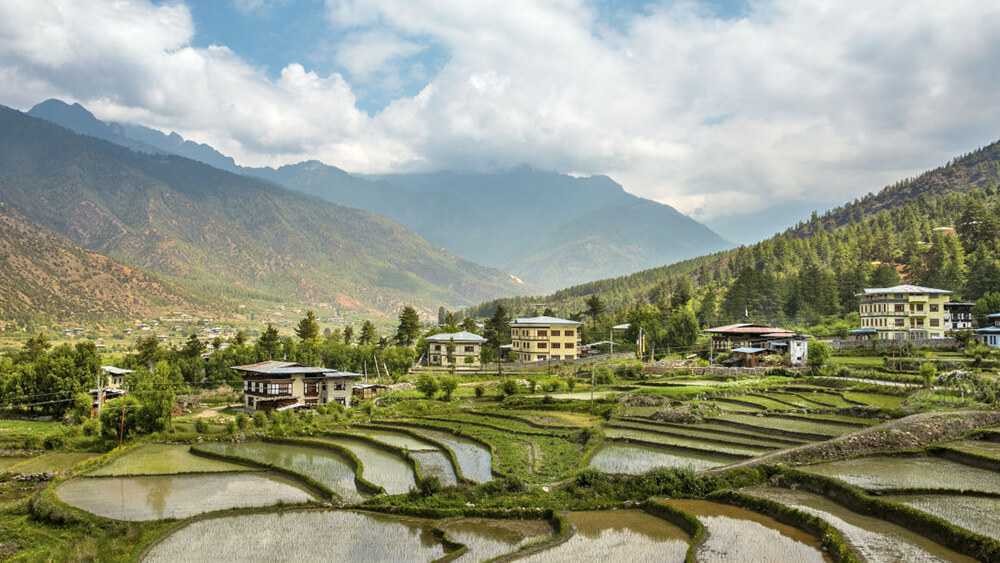 Seen on your way from Thimpu to Punakha, it houses 108 Chortens or Stupas, built to honor the Bhutanese soldiers who were killed when fighting against the insurgents from India.

On a clear day, the view of the snowcapped peaks of eastern Himalayas will take your breath away. 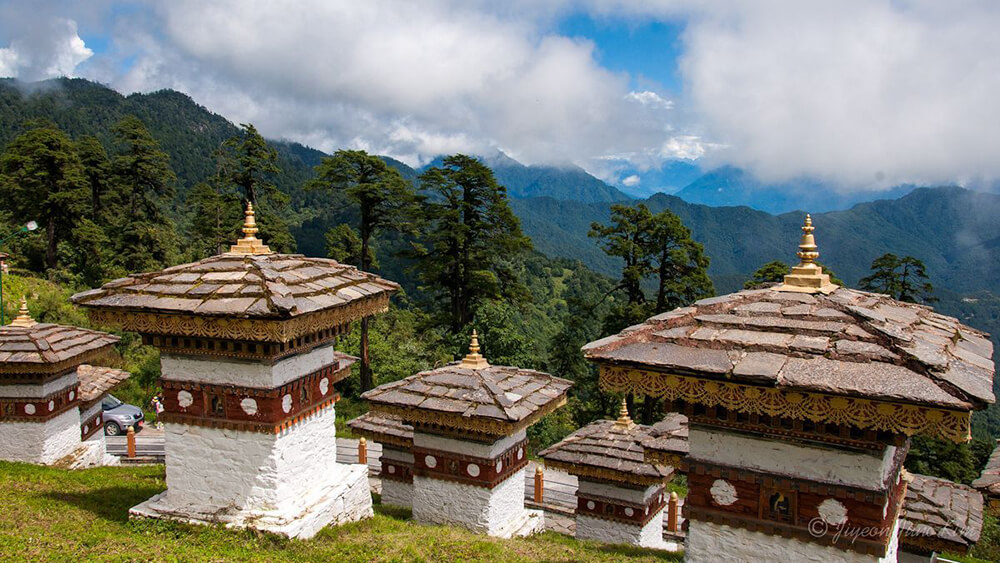 Famous for its biodiversity, Phobjikha is an important wildlife preserve in Bhutan, and is one of the top Bhutan tourist places. 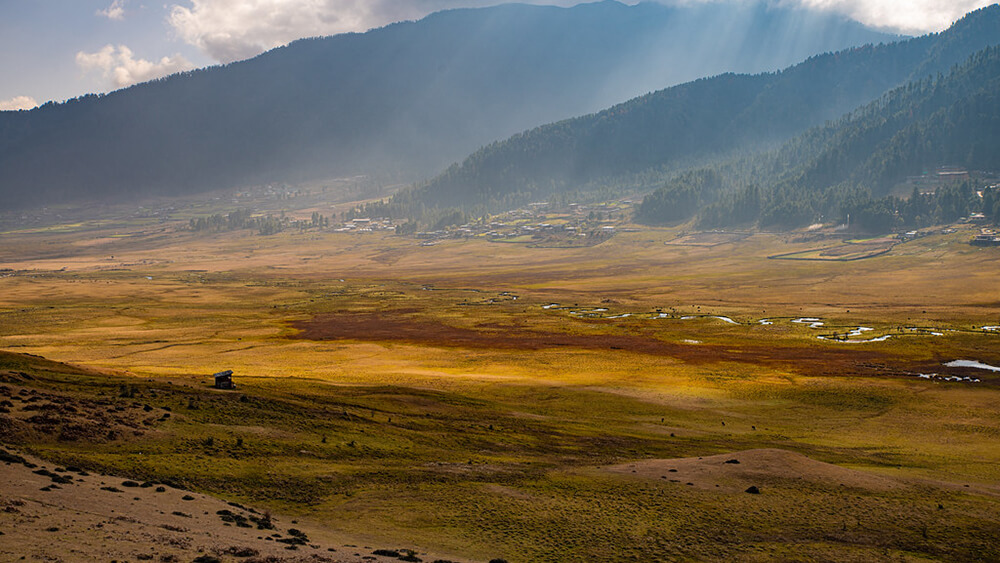 How to Get to Bhutan?

There are 3 airports in Bhutan, Paro Airport, Gelepu Airport and Thimphu Airport.

Paro Airport is the only international airport in Bhutan, about 6 kilometers away from the center of Paro, at an altitude of 2,200 meters, and the only airport in and out of Bhutan.

Paro Airport has only one runway, one passenger terminal, one cargo building and two aircraft berths.

The departure destinations are mainly in major cities in Nepal and India, including New Delhi and Kolkata (India), Dhaka (Balangdesh) and Kathmandu (Nepal).

At the same time, it also connects to major cities in Southeast Asia: Bangkok and Singapore.

Some of my friends and I flew to Kathmandu from Lhasa, Tibet, then flew to Paro from Kathmandu, and two frields flew from Bangkok to Paro directly.

Because of limited flights, it is always fully booked every days in high season, if your flights connection have any delays, you may miss the flight and won't count in again in next few days even weeks, you have to reschedule the trip and get a plan B.

When is the best time to visit?

The best time to visit Bhutan is March to June and September to November.

Spring is from March to May, which is a good opportunity for tourism and hiking.

Although it is more cloudy and rainy in spring, wild flowers such as rhododendrons and orchids bloom all over the mountains, and many birds are coming back, so it is a good time to watch wild animals and plants.

It is autumn from September to the end of November.

The daytime temperature is about 20 to 28°C. The sky is clear, you can overlook the snow peaks with the blue sky.

This time is the peak season for festivals and celebrations in Bhutan. It is also the best season for trekking, so you need to plan your itinerary in advance.

Are there ATMs in Bhutan? Cash?

There are a few ATMs in the capital, and Visa and Master credit cards are acceptable.

The Bhutanese currency is called Ngultrum, you can exchange some to buy souvenirs or drinks on streets.

However, locals prefered US dollars more, so it is necessary to have some small notes of US dollars with you when traveling across the country.

Bhutan is a nationwide smoking ban. It is illegal to bring cigarettes into the country, and you will be fined even refuse to enter.

Cameras, video cameras, personal computers, and other electrical appliances used by tourists must be declared at the customs when they enter the country, and they will be released through customs when you leave the country.

Due to the large temperature difference between morning and evening, tourists should prepare warm clothes to resist the coolness of the night.

Bhutanese people are conservative, especially women, so in summer, if tourists go to Bhutan, if they wear sexy tight clothes and walk on the street, Bhutanese will be disgusted and angry. Wearing shorts is also unwelcome.

Moreover, Bhutan also protects and promotes their traditional culture and crafts that they are proud of. Everyone in public wears their unique national costumes - Kira and Gho.

Men wear the Gho, a knee-length robe somewhat resembling a kimono that is tied at ....the waist by a traditional belt known as Kera.

Women wear the Kira, a long, ankle-length dress accompanied by a light outer jacket known as a Tego with an inner layer known as a Wonju.

You have no idea what to eat before your tour, but we were surprised about Bhutanese cuisine.

Actually, you have many choices with flavors such as Bhutan, India, Mainland China and Tibet.

Bhutanese like to eat chili. If you don't like chili, please let your guide or waiter know in advance.

Generally speaking, tipping is not encouraged in Bhutan.

But traveling abroad generally involves tipping. The tipping standard for Bhutan travel is based on the standard of $ 5-6 per day in Nepal.

Elaina ChanAn experienced world traveler and hiker based in Guilin, China. She climbed to the top of Kilimanjaro in 2019, and steped on South Pole in 2017.
We think you might also like