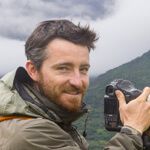 Chris Bray (Founder & Tour Leader) still leads many of our tours and his passion for wildlife, photography and wild places continues to drive our growth. Chris grew up sailing around the world then leading world-first cart-hauling expeditions across the arctic before becoming an award-winning Australian Geographic photographer, Lowepro ambassador and Canon’s Australian ambassador for five years. Chris’s work has appeared in National Geographic and Discovery Channel along with Australian Geographic, TIME Magazine etc. He’s also an accomplished writer, with feature articles published around the world and even a successful book 'The 1000 Hour Day' (now an award-winning documentary 'The Crossing'), sits on the advisory committee for The Australian Geographic Society and is founder and CEO of Conservation United, crowd-funding the world’s critical conservation projects. Chris is also an International Fellow of 'The Explorers Club' and has been chairman of their Australia and New Zealand chapter. Chris and his wife Jess are also keen high-latitude sailors, recently becoming the first people to sail a junk-rig boat through the Northwest Passage over the arctic, on their little 29-foot wooden sailboat 'Teleport'. Australian Geographic Society's 'Young Adventurer of the Year' in 2004 for a Tasmanian wilderness hike, Chris has also been awarded their 'Spirit of Adventure' medal in 2009. In 2017, Chris and Jess started Swell Lodge on Christmas Island.