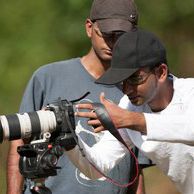 Aatish and Aashit Patel were born in 1989 in Nairobi, the bustling capital city of Kenya. At a very young age they were introduced to the African wildlife, with regular weekend trips to the Nairobi National Park and occasional safaris to various National Reserves throughout Kenya. As time went by, their love for Africa and its wildlife grew immensely. Eventually they began venturing out on their own to different parks, but none had a special place in their hearts like the Maasai Mara National Reserve, home to the greatest wildlife spectacle on earth, The Great Wildebeest Migration.